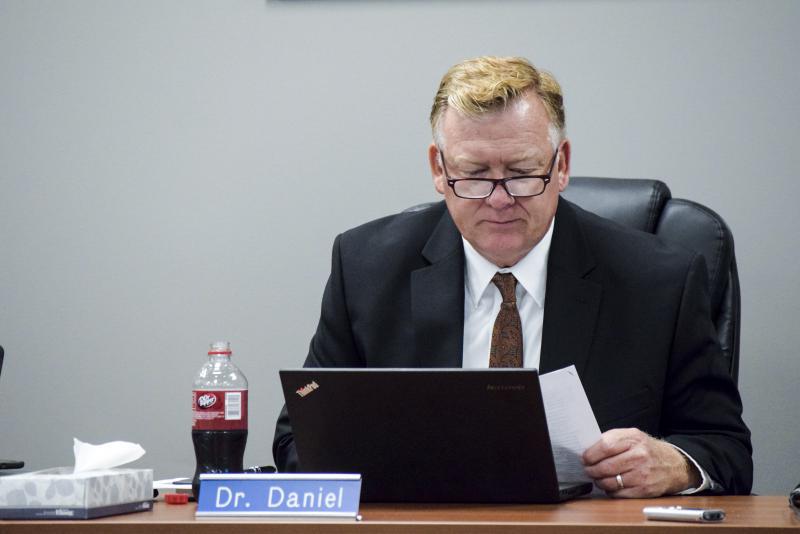 School districts increasingly use e-learning days to allow students to complete their schoolwork from home when the weather’s bad.

“An e-learning day means students will be in school one less day,” he said during Wednesday’s school board meeting. “That’s one less day in the classroom with a teacher; one less day having access to breakfast and lunch; and one less day interacting with their peers.”

Daniel said the district has been 3,000 and 4,000 students who receive free and reduced meals at school.

“That breakfast and lunch is very important, as it is with all of our districts around us and throughout the state, but we’re thinking that perhaps having that extra full day in the school year is an advantage for those students and those families,” he said.

Another major concern for administrators is the challenge of adapting individualized learning plans (IEP) for students with special needs to an e-learning format.

“It’s very detailed,” Daniel said. “I’ll also say it’s very intensive, and we need to have proper preparation to move in that direction.”

Daniel said he’d like to have more discussions with teachers and parents before exploring the possibility of e-learning days further.

Neighboring . The district reported overwhelming support for the program after surveying parents, teachers and students about the pilot’s success.

Daniel said each district has to do what’s best for its students.

“I know (District 87) went through their due diligence and are doing it well, it just takes us some more time to move in that direction,” he said.

There’s also the problem of upcoming state legislation that could change the length of school days.

Daniel said administrators expect the state will require a minimum 5 hours of learning per school day—including e-learning days. That could prove tricky to navigate, Daniel said.

“How are we going to document 5 hours of work at home? How are you going to teach those 5 hours?” he said.

Daniel said he expects lawmakers to vote on the bill within the next two weeks.

He said if the bill is passed, the district may look into using e-learning curriculum for its emergency days (missed days due to bad weather that get tacked onto the end of the school year).

Unit 5 Business Manager Marty Hickman says the district is significantly underfunded—to the tune of over $32 million.

That’s according to calculations from the state’s new evidence-based funding model.

“When they run our district through that model and say what would it take to fully fund those 26 elements that are proven outcomes, our district would need just over an additional $32 million in revenue,” he said during a budget presentation at Wednesday’s board meeting.

Hickman said that doesn’t necessarily mean Unit 5 will set a goal to fully fund those outcomes.

“Do we in our district right now need the $32 million extra? I don’t believe that we do, but we need significantly more than we have today,” he said.

Hickman said the district does have a sense of urgency to bring in more revenue for underfunded existing programs.

But with nearly all of Unit 5’s various funds at the maximum tax rate, “we could not tax at a higher rate in the district even if we would like to,” he said.

“So the only increases we have at the local level are new construction, or if existing property value increases,” he added.

While that’s encouraging, “Is it dollars that are going to move us more quickly to the adequately funded piece? Not really,” he said. “It’s just spread out across the state of Illinois, it’s not going to move the needle.”

Daniel said the district will benefit from plans to add funding for early childhood learning and other specialized programs.

WGLT depends on financial support from users to bring you stories and interviews like this one. As someone who values experienced, knowledgeable, and award-winning journalists covering meaningful stories in central Illinois, .