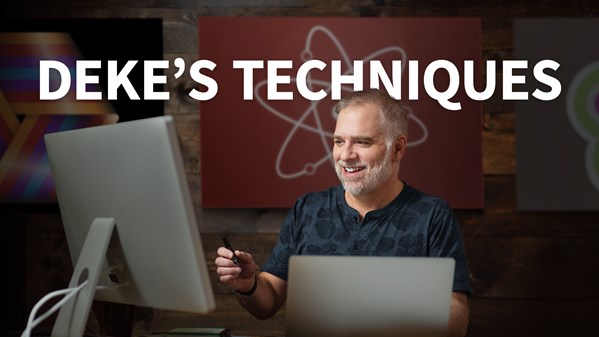 – Hey gang, this is Deke McClelland. Welcome to Deke’s Techniques! This week, I’m going to show you how to take a piece of line art and color inside the lines. And I don’t mean like you’re coloring in a coloring book, I mean coloring in the lines themselves. So for my part, I started with this very rough sketch that I created using a felt tip marker and a piece of paper and then I shot it with my iPhone, took it into Photoshop and cleaned it up in part using a Wacom drawing tablet along with a pressure sensitive stylus.

Now notice that I’m wearing a scarf and a down jacket, I decided that things worked better if I was just a floating head. And then I went ahead and added some color. So you can see that I’ve got watercolors here in the background but I also have a different watercolor image inside of the lines themselves. Here! Let me show you exactly how it works. Alright, here’s the final version of the artwork just so you have a chance to see it onscreen. And here’s the cleaned up sketch which, as you can see over here in the layers panel, is an absolutely flat image file.

What we need to do is select all the black lines and jump them to an independent layer as we’re seeing in the case of this floating head layer in the final composition. Now the way not to do that is to switch from the quick selection tool to the magic wand tool. And then click inside the black lines because for one thing, you’re not going to select all of them. Notice that the eyebrows and the eye and parts of the nose are not selected. You can remedy that to an extent by turning off the contiguous check box up here in the options bar and then clicking inside a different detail such as the eye right here.

So deselecting contiguous, allows the magic wand to select non-adjacent pixels. The problem is, it’s not doing a very good job. We can do better with just two clicks. So what I’m going to do is press CTRL+D or CMD+D on the Mac to deselect the image. I’ll just go ahead and switch back to the rectangular marquee tool so that I have a simple cross for a cursor. Click number one is to switch to the channels panel by clicking on it’s tab or if you can’t find it on screen then you can go up to the window menu and choose the channels command.

Alright, now I’m going to switch back to the layers panel, and I’m going to create a new layer by pressing CTRL+Shift+N or CMD+Shift+N on a Mac. I’ll go ahead and call this new layer, floating head and then click okay. Now, you want to tap the D key to instate the default colors so that the foreground color is black as you can see down here at the bottom of the tool box. And then fill the selection with that foreground color by pressing ALT+Backspace here on the PC. That’s going to be OPT+Delete on the Mac. And then you can go ahead and deselect your artwork by pressing CTRL+D or CMD+D on the Mac.

Alright, so notice if I turn off the background, then I can see all of my black out lines exactly as they’re represented in the original image by the way, against an absolutely transparent background. And so we have absolutely no vestige of white. What we do have, if I were to zoom in here, is a little bit of translucency around the edges. So in other words, every single pixel is black with varying degrees of opacity. I’m going to press CTRL+0 or CMD+0 on the Mac to zoom back out and then I’ll click on the background to select it.

I’ll go ahead and switch to another image that I have open here which is this guy right here. It’s a traditional water color wash and it comes to us from the Dreamstime image library. About what you can learn more and get some great deals at dreamstime.com/deke.php. Notice that the watercolor layer itself is selected along with its image number in the Dreamstime library. Armed with my rectangular marquee tool, I’ll just go ahead and right-click inside the image window and choose duplicate layer and then I’ll change the document to that guy I’ve been working on, Deke head sketch and then I’ll click okay.

Now I’ll go ahead and switch back to that image and you can see that all of those black lines now blend perfectly with the watercolor wash. At this point, I no longer need the background. Not even as a back up by the way. So I’ll just go ahead and select the background and press the backspace key, or the delete key on a Mac to get rid of it. Now what I want to do is color in those black lines with a different watercolor wash. So I’ll go ahead and select that floating head layer and then I’ll switch to this image right here once again from the Dreamstime image library.

Notice that the watercolor layer is selected and so I’ll just go ahead and right-click inside it once again and choose duplicate layer and change the document to Deke head sketch and then click okay. Now I’ll go ahead and switch back to that file which looks like the same file we were in just a moment ago but if you take a look at the layers panel you can see that we’ve got all the layers that we’ve created so far. Now what I want to do is clip this darker watercolor inside of the lines associated with the floating head layer and the easiest way to do that is to hover over the horizontal line between the two layers and then press the ALT key or the OPT key on the Mac and click in order to clip the top layer inside the layer below it.

Notice that this layer slider right here, I’m going to drag its black slider triangle over to the right, at which point you can see I’m making anything in this case, with a luminous level of 171 or darker invisible. That means that we’re seeing just the light stuff inside this particular layer. We’re also getting some very abrupt transitions and a way to solve that problem, is to press the ALT key or the Option key on a Mac and drag the left side of this black triangle so that it splits in two, all the way back to is original position on the left side of the slider bar so that the value before the slash is 0.

Now, I’m going to drag this guy, the right half that’s left over, all the way over to this location so that the value after this slash is 220. And we end up with some very smooth transitions. Some of the pixels might be a little brighter than the background. At this location right here for example, but for the most part they’re dark and if I press the Enter key or the Return key on a Mac to accept that change and I zoom out, you can see that I’m retaining some of my black pixels as well and so if I press CTRL+Z or CMD+Z on a Mac, this is how things looked just a moment ago.

And if I press CTRL+Shift+Z or CMD+Shift+Z on a Mac here inside of the most recent version of Photoshop CC anyway, then I will redo that operation. Alright, now I’ll press Shift+F in order to switch to the full screen mode and I’ll zoom on in as well. Just so you can see what we’ve been able to accomplish, I’ll revert the image to it’s original appearance. So there is the final version of the black and white sketch that I saved out as a flat PNG file. And here is the color version of the artwork with the areas outside the lines colored with light watercolors and the areas inside the lines colored with dark watercolors here inside Photoshop.

Alright, that was fun right? Say it was, come on! Aww! Next week, I’ll show you how to combine multiple pieces of line art on independent layers and still color inside the lines. Deke’s Techniques each and every week! Keep watching!