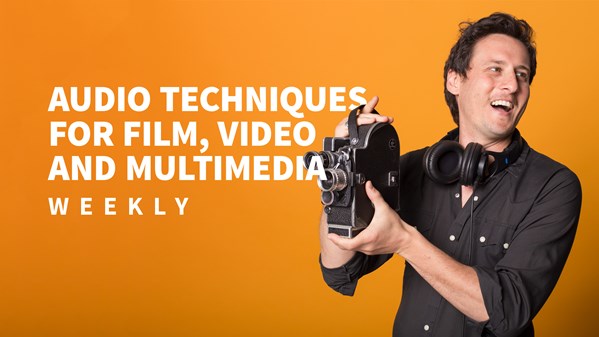 – [Narrator] Anytime you edit audio in a film, video, or multimedia project, you’re going to have a lot of clips and regions. To make our sound seamless and to try to avoid digital clicks, it’s absolutely paramount that we add fades, fade-ins and fade-outs, or cross-fades to every clip or region boundary. This week I want to show you some fast and efficient methods to implement fades. If you’ve been following along in the previous weeks, you know that we’ve been working on this section of dialogue in this film. Now notice once we’re done filling in with tone, we have a lot of cuts.

Notice that I’ve taken away all the fades, and if you’ve watched in the last couple weeks, I’ve been dropping fades using some really handy key commands. I want to go over some of those key commands so you too can implement fades really quickly and efficiently. The first thing I want to look at is called batch fades. If you have a bunch of regions like this, and you want to cross-fade them all together as well as fade in and out of the section, you can select over the whole piece, and type command-F. Now Pro Tools knows there’s a bunch of region boundaries there, and it then gives you the batch fades dialogue, and this means that it’ll look at the first region and fade-in.

You can adjust the shape to what you want it, and then you can also adjust the length. Then it looks at any regions that are touching each other, and it gives you the opportunity to select the length and type of cross-fades. So in this case, we’ll choose 10 milliseconds, and we’ll do an equal power cross-fade, and then it also looks at the outgoing region boundaries, and it allows you to do a fade out of the last region. In this case, it would be right here, and you can choose the length. So this time I’m going to actually make the length a little bit bigger.

I’ll do 30 milliseconds. So when I click OK, it automatically adds in all those fades. Now they’re really small, so I’m going to have to zoom in to see them and to make sure. Yep, see it put them in. Each region boundary now has a cross-fade. And we’ve got that fade-out at the end, and the fade-in at the beginning. So that’s how batch fades work. So now you always want to listen through and make sure that there’s no bumps in the road here in terms of how it cross-faded.

Let me show you some other ways to manually fade in case batch fades doesn’t really cut it for you. So I’m going to select all this, go back up to edit, go back up to fades and say delete. So get rid of all those fades. Now here’s how you can manually fade. First of all, if you’re fading in, all you need to do is do a single selection right at the head and from here on to the beginning, you can create a fade. This is using these three key commands. Remember the keys D, F, and G.

So D will do a fade-in to the point where your cursor is. And let me zoom out, and let me show you the opposite of that, which is the key G, and that will fade out from where your cursor is to the outpoint of the region, so if I type G, it’ll just do an automatic fade from that point to the end. So that’s real handy, right? Now what about cross-fades? So here I may want to do a cross-fade between these regions, so I make the selection across, zoom in a little bit, and that’s the one in between, so you have your D going incoming fade, G is outgoing fade, and the key in between those, the F key, does a cross-fade.

So I know all of these shortcuts seem like they only offer slightly small advantages time-wise, but if you work on a feature-length film, I guarantee you knowing these quick keys, including also batch fades, will add up and literally save you hours of time over the course of the project.